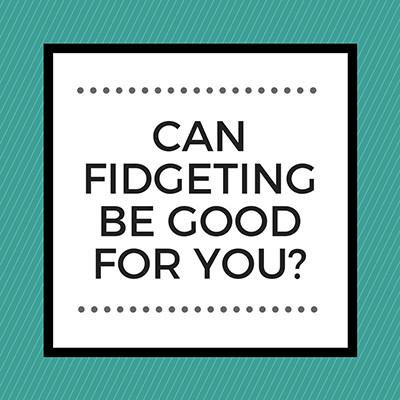 Even the smallest bits of physical movement can go a long way. Many believe this, citing the so-called 1-minute work-out as an example. Even more so, fidgeting can help put your health back on track. Don’t believe it? Here are some of the ways fidgeting can benefit you and your health.

We know that tapping your toes and keeping your fingers busy with a fidget toy won’t get you to finish a whole marathon, but researchers have claimed that fidgeting has some health advantages that are actually quite amazing. Below are some of the benefits of fidgeting. Read on while tapping those toes.

GET RID OF UNWANTED CALORIES

Although it is not the best alternative for working out and sweating it out, a Mayo Clinic study found that having the tendency to fidget can actually burn some calories. They set up a study that monitored the movement of 10 obese people and 10 lean people and measured that they could burn as much as 350 calories by just fidgeting. That’s 350 more calories you can burn than by sitting still.

FIDGETING IS GOOD FOR YOUR HEART

More and more adults are becoming chained to their desks for hours either for work or for entertainment (surfing the Internet). Without physical activity, you’re not doing your health any favors. However, researchers from University of Missouri have found that fidgeting aids in increasing blood flow, making arteries function properly.

FIDGETING CAN (SLOWLY) LOWER YOUR RISK OF DEATH

When you spend your day to day life sitting down idly and you don’t allot time to exercise, in the long run, this could result in poor vascular function and low blood–this can have possibly fatal effects. But even if you don’t have the time to do some exercise, fidgeting can help. In a research conducted by University College London, it has been found that women who sit for more than 7 hours a day and are categorized as “low fidgeters” are more prone to dying than those who are “high fidgeters”.

Even though it is not a good alternative to exercise, fidgeting can be good for you. So be sure to include both exercise and fidgeting in your daily routine!