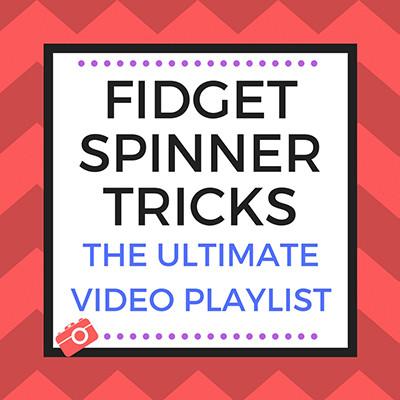 While you probably won’t see ‘fidget spinning’ in the next Winter Olympics, fidget spinner tricks are growing in popularity as the fidget spinner continues to sweep the nation. In fact, there’s a growing number of self-proclaimed professional fidget spinners.

It’s undeniable — some of these tricks are pretty darn amazing and the bar is constantly being raised by those on the quest to create the ultimate fidget spinner trick!

We’ve set out on our own quest of sorts…to find the coolest fidget spinner tricks around. What you’ll find below is our (ever-growing) list of the sickest trick.

Ok, ok… Maybe this video doesn’t have any mind-blowing tricks, but I does have a ridiculous number of views and is sure to have you laughing. Thanks to the guys at GeekBite for this gem.

Awesome video by Slater Brown (Slater Brown on YouTube) where he pumps out trick after trick with his spinners. We lost count of just how many. Our favorite is the one where he catches the spinning spinner between his thumb and each of his other fingers one after another! Sick!

Watch and see how you can turn your spinner into a top. Yes, a spinning top. And JM (JM Everything on YouTube) even works a little physics lesson (kind of) into the video…so check it out! Make your science teacher proud!

Watch as the guys (or guy) over at IncredibleScience (IncredibleScience on YouTube) cranks out 10 sweet fidget spinner tricks. Well, 1 of them wasn’t that sweet, but the rest are. One of our favorites is the one he’s named Rise to the Challenge. So make sure you catch that one.