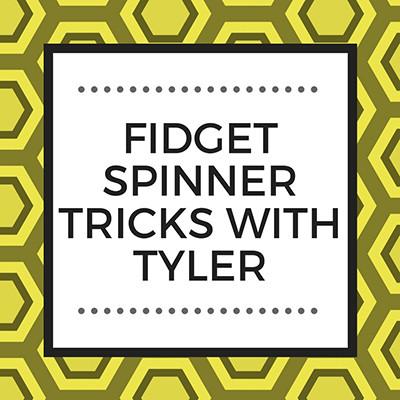 We recently had the opportunity of working with Tyler (tylerf on YouTube), an up-and-coming (and hilarious) Vlogger, on a fidget project. The video below is the result. In it, he showcases some of our most popular fidget toys, including our super popular fidget spinner. So without further ado, take it away, Tyler!

There we go. Hey guys. What’s going on? Welcome to a brand-new video, and today, I’m actually at my brother’s friend’s house but anyway, this company, FidgetDoctor, sent use some of their Fidget toys, and you’ve probably seen those things all over the internet lately, so yeah, we’re just gonna open them today.

Okay, so let’s open up the thing that everyone has been talking about, if it will focus, the Fidget Spinner. Again, thank you to FidgetDoctor for sending this stuff out and let’s just crack it open. Ooh. I can definitely see myself playing with this all the time in class.

Okay, guys, and all of a sudden, we’re back home, and I thought I’d show you the other Fidget toys in more in detail so this is the Fidget Ball and you basically just roll these metal things around. It’s pretty fun just for one-handed stuff, and then this thing here, I’m holding the camera so let me put it down. This thing, basically it just inverts forever and you need two hand to do it, but it’s super fun and addicting.

Then you could also hold it by one of these things and do it so it sort of like…. Okay, we got the crash mat. Let’s try a Fidget Spinner flip. Let’s get it spinning and … yeah. Okay, Spencer’s gonna try doing a water bottle and then put the Spinner on top of the cap. Oh, and then wait, wait. Put the Fidget Ball on top, maybe. Yeah. Oh.

Tylerf: Table spin. Oh, whoa. That’s like a catapult. Oh my gosh. Okay, Fidget Spinner versus treadmill. Whoa, oh, still spinning. Look, I’m almost hitting my head on the ceiling. Here goes Spencer. What did you put it at?

Tylerf: Seven miles an hour. Oh my gosh, seven… Oh my gosh. I recommend turning around to get it. Okay.

Tylerf: Okay, let’s try this. The treadmill’s going at half a mile an hour and now, let’s give it a spin. Oh, no. Sorta? Let’s try it again. There we go. Let’s see how many times we can go back and forth. One. Ah!. One, two, three, four, five, ah. So, yeah, guys, hopefully, you’ve liked these Fidget Spinner tricks. Again, huge thank you to FidgetDoctor for sending us all this stuff, and you know what? I’m gonna put one of their stickers right on my desk with all my other stickers. I think it’s gonna go right here. I guess it won’t fit up there so it’s gonna go right here. There we go, FidgetDoctor.

Also, guys, this is unrelated but I ordered a Funk Bros shirt and it just came in today. I’m super happy about that, and you’ll probably see me wearing it in some videos. Yeah, hopefully, you guys have enjoyed this video. If you did, please give it a thumbs up. Also, subscribe if you’re new to the channel, and I’ll see you guys next time. Goodbye.