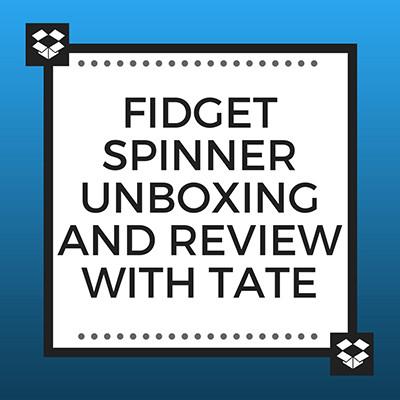 Have a watch as our friend Tate (Tate Yap on YouTube) unboxes his new FidgetDoctor™ fidget spinner, all the way from Canada! His spinner arrived and he couldn’t wait–he had to open it and make a video right away (not like we can blame him). So without further ado, take it away, Tate!

What is going on, guys? Today, I came home and I got a package in the mail. Huge shout-out to FidgetDoctor for sending me some of the spinners. The link to buy these spinners will be in the description, and they’re originally $40. Right now, there’s a sale. I think it’s like 45% off. It’s like $22, which is really good. You can get two for the price of one, basically. So guys, go down to the link. Check them out. I’m going to give you a review, so watch till the end. They look already better than the ones I’ve seen, like some of the ones I’ve seen are like softer plastic. This is like hard plastic, so this will be good. I’m just opening it up right now, so we got it right here. This is sick. Guys, if you want to see more videos with the spinners, I might do like a $1 versus $40, or like some kind of trick shot thing where I use an air compressor and make it go really fast. Leave a like and comment down below. We’re just going to give this a spin. This is really cool. Oh, that’s sick.

Yeah, guys, this is awesome. Okay, it looks so cool on camera. Look at that. It looks really cool on camera. So I think in this video, we’re just going to do a spin test and an overall review of the spinner, so let’s get our stopwatch out, and we’re going to see, this is straight out of the box. I’m not sure if it spins faster or slower when it’s used after a while. I’m not sure, so we’re going to see. I just opened them today, like I got home, and I just started recording. So I got my stopwatch right here. We’re going to see how long we can spin this for. All right, we got our stopwatch right here, so we’re going to spin it and then press the time. Three, two, one. I might have to take or add a couple seconds onto the time at the end, just because it takes a second to go and click it. So three, two, one. [SPINNING] ……A minute and 23 seconds.

We’re going to try this again, just because I didn’t really click it that hard, so we’re going to see if it’ll spin for longer, so let’s press “Reset” and … (singing) And 44 seconds, so that’s pretty good, a lot longer than most of the fidget spinners I’ve seen. I think that … Oh. This is cool. I think you can pop the caps off, but I’m not going to try, because I don’t want to wreck it, but I’m assuming you can. There isn’t too much of a noise, like there’s a little bit, but I’m sure if I put like some WD-40 or something in there, it would make a lot less of a noise. Yeah, it’s pretty good. It spins for quite a decent time, just like I literally just took it out of the box, so that’s pretty good. I’m going to try and see if I could do the warp thing with my camera, so yeah. Hopefully, we can do that, because that’ll be kind of cool. I changed the settings. I think this will work.

I’m not sure how fast you have to spin it for it to look … It looks a lot different than … I don’t know how you can get that warp, though. I saw it under Instagram. Not too sure how you do it, so if you guys want to check out an actual video of the exact same spinner being like, you guys have probably seen there’s like a warp thing you can do with your camera. Go check out their Instagram in the link in the description. All of their social medias will be in the description. Go like and follow all their things. If you guys want to see a fidget video with this, that would be like, I’m down to do one. I probably will anyways, but let’s hit 50 likes on this video. I know we can. We always do it. Thank you so much, FidgetDoctor, for sending me some of these. It’s awesome. It’s really good condition.

Yeah, a lot of the ones I’ve had were like almost between plastic and rubber, where you could pop out the bearings very easy, which isn’t good, because it’ll wreck it, but this one, I’m applying pressure to it, and it’s not popping out. Yeah, it’s pretty good. It’s pretty good. I definitely recommend this, and I know on some stores and online sites you can get them for like a dollar or two, but those ones end up breaking, so I do suggest spending a little bit more money and getting a good-conditioned one that you can just use for a long time instead of them breaking after a week or two. Yeah. Honestly, the best one I’ve used so far, and no, they’re not telling me to say anything good about their product. It’s completely an honest opinion.

It’s pretty good, like usually with fidget spinners, I can’t really flick them, so they go a little bit fast, but as you can tell on this one, it’s going a decent speed, and that’s just with one hand. Usually when I flick it with one hand with other fidget spinners, it goes like that and nothing more. The link is in the description. Compared to a lot of other fidget spinners, this one’s actually pretty quiet, like you can’t hear it too much. I do want to see what it’s like to use the air compressor on this thing, so that would be a fun video if you guys want to see it. Let me know in the comments below. If you made it this far into the video, comment FidgetDoctor. Thanks again for sending me some spinners. I appreciate it. I’m going to be using them in quite a few videos, probably, if you guys are interested. I think I’ll make at least one or two more videos anyways, because these are pretty cool, and I know fidget spinners are like a huge trend right now. That’s a $40 fidget spinner on sale for 22 dollars.

That’s going to wrap up the video. If you did enjoy it and want to see more videos with this, please leave a comment down below and a like. These things are actually really sick. Thanks again. I know I said this like five times. Thanks again, FidgetDoctor, for sending me them. I’m going to use this a lot. Honestly, even right now, I’m not really doing anything. Obviously, I’m making a video, but it’s just addicting to spin in your fingers. You guys are going to have to get one for yourself to know, like if you haven’t used a fidget spinner before, you have to actually use one to see like … When I first saw them, I’m like, “Oh, that’s kind of weird, why it’s such a big thing,” but once you get one, it’s like you know why it’s a big thing. It’s just addicting to do when you’re not really doing anything. Like I could see myself sitting down watching TV and just doing this. See? I’m doing it right now, and it’s so fun, and I don’t know why.

Anyways, guys, you’re going to have to see for yourself, if you haven’t used a fidget spinner. A lot of people that I know have gotten like the $1 ones, and they drop it once, and it’s broken. Obviously, I’m not going to drop this to see if it’ll break or not, but I’ve read some reviews, and it’s droppable, and it’s fine. Thank you guys so much for watching. If you enjoyed, please leave a like, comment, subscribe if you’re new. Share with your friends if you enjoyed. I appreciate you. I’ll see you in the next one. Peace.